Wants scholarship? Apply Now
and we'll be in touch!

Thank you for using UMock

The scholarship is awarded to an exceptional student who displays educational and personal excellence in the path to a profession in medicine.

Hello my name is Leticia Rivera and I am a second year medical student at TCU and UNTHSC School of Medicine in Fort Worth, Texas. I ultimately decided to apply for the UMock Scholarship so that I can put more of my energy and attention on my education rather than focusing on my financial burdens. 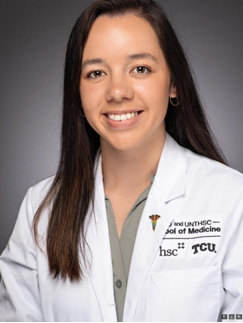 Tuition at TCU and UNTHSC is around $60,000 making it significantly more expensive than a lot of the other medical schools here in Texas. This in itself has been a stressor since the day I started classes, although I do not regret for one second choosing this medical school. On top of that I’ve run into some unexpected costs this year, one of those being my car. In August, I had to replace not only my brakes and my battery, but also four new tires. This is obviously not an ideal situation and has added even more financial stress. To alleviate this anxiety, I am now working a few nights each week babysitting. This is time that could be spent studying or even getting a few extra hours of sleep.

By receiving the UMock Scholarship I can focus more on being the best student and leader I can be. I'll be able to put more attention into my duties as a secretary for the medical school's SNMA chapter, a board member of a program called the Purse Project where we donate purses to women in need. These purses are filled with things such as feminine products, shampoo, conditioner, toothbrushes, toothpaste, etc. Also focusing on being a member of the thrive committee at the school of medicine where I get to have and put on events that the school hosts for the student body and bring our student body closer together.

These duties, as a medical student and more, will get more of my attention by receiving this scholarship. So, I'd just like to say thank you to UMock for considering me for your scholarship and granting me this amazing opportunity.

If one was to walk into a room full of medical students and ask if they had struggled to get into medical school, I could confidently say that more than 75% of that room would say that the path to medicine was not an easy one. This is likely unsurprising to any individual, as no one thinks to become a physician because it is “easy”. For some of us it was overcoming the MCAT, finishing a master’s program to raise a low GPA, building our resumes, etc. Although all people struggle, some of us must battle forces such as structural racism, poverty, navigating education as a first-generation college student, and other structural inequalities. Dealing with situations such as these can be discouraging enough to steer someone away from their goals. Some of us had the perfect combination of perseverance, drive, and maybe just a little luck with things falling in our favor, to get us exactly where we have always wanted to be.

I don’t like to admit that lack of money and resources has been the stem of some of my greatest obstacles on my path to becoming a physician, but it has been. Each day, I am aware of how finances can impact my journey into medicine. This fear really came into fruition the summer before my junior year of college. Each year I made sure to finish my FAFSA as early as possible, ensuring that I received as much financial aid as possible. I attended The University of Missouri-Columbia for undergrad, a land grant university. This means as a Missouri high school graduate I would have my tuition paid for if I was Pell Grant eligible. There had been no changes in my parents’ financial situation going into my junior year. I was still working about 15 hours per week as a Certified Nursing Assistant and another 15 hours each week in a research lab just to keep up with my bills. My dad was getting paid to catch chickens in chicken houses and my mom was a sales service representative, a job she had had for 13 years but was never able to work up to become full time and never received benefits. A family with four kids, two of them in college and no extra money after paying the bills.

To my surprise, I was informed I was no longer Pell Grant eligible. You can imagine my confusion when not only had I been Pell grant eligible in the past but had been awarded the maximum amount the previous two years. Immediately, I called the financial aid office to get clarification on what had happened. All the office told me was that I no longer met the requirements for Pell Grant eligibility and that there was no way for me to work around it. None of my family members have attended college, so I took their word. I did not know any better. I was obviously devastated. I knew that I would not be able to attend school without financial aid. My parents couldn’t take out loans for me even if they wanted to due to their poor credit. How was I going to miss school for a whole year and be able to just jump back into classes? I stayed in touch with the financial aid office for scholarship information or anything that could help me start my classes in the fall. By the grace of the powers above, whatever that may be for you, they investigated my file once more. It may have been purely from the annoyance of hearing from me just about every day, but they realized why I no longer met eligibility. Two years prior, the year they looked at to decide my financial aid, my dad took out a 401(k) after losing his job of 15 years due to employee cutbacks. Long story short I was then able to appeal financial aid and was then re-awarded my Pell Grant eligibility, allowing me to continue my education that fall.

Looking back on that summer, I am beyond grateful that I was determined to find a solution. This could have very easily been the distinguishing moment in my life, the moment that could have changed the outcome of the future. If I hadn’t been so persistent with the financial aid office, I am not sure that I would be in medical school today. As cliché as it may sound, I did not just persevere through this tough situation for myself. I persevered for the young Mexican girls in my life so they now know they can become a physician someday too. I persevered for my parents and my siblings, they have been my strongest support system and have had all the faith in the world that I would become a physician someday. My parents always tell me they want better for me than what they had for themselves. And in the end, I persevered for myself, my dreams, and my future patients.

This moment was just one of many obstacles that I have had to overcome and that I will someday in the future have to overcome, but it taught me to fight for myself, it allowed me to problem solve, it has made me more certain that this is what I want to do for the rest of my life, and so much more. As stated above, I can give some thanks to my hardships, because without them I would most likely not be who I am today or be a second-year medical student. At times it is difficult to see the way out when we are in the thick of it, but I continue to remind myself that the hardest battles are given to the toughest soldiers. As a recipient of the UMock scholarship, I would be relieved of some of my financial burdens, which would allow me to focus on my education. Thank you for considering me for the UMock scholarship.